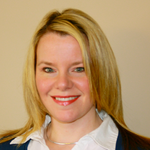 Dr. Rae Lawrence has the monumental task of mananging a sales territory that includes the whole of North America.  She has a PhD in Computational Chemistry, over 10 years of experience in the chemistry software industry, and for the past year has been more than up to the challenge of single-handedly spreading the Cresset word in Canada and the United States.  Rae is also hosting Cresset’s North American UGM in Cambridge, MA on May 18th, 2012 and you can register for the event to get free software training and meet her there.

We don’t know how she manages to do it all, but we’re very glad that she does.  Get to know the funny, intelligent and extremely hard working Rae, as we present 8 Questions with Rae Lawrence:

1. What was your first job?

I was in the performing arts.  I was part of a local theater troupe as a quadruple threat – act/sing/dance and several musical instruments (as needed).  I did this for a couple of summers before I got my first lab job.

2. Which projects are you most proud of?

I’ve been involved behind the scenes in a number of projects – protein homology modeling, GCPR modeling, active site characterization, and model building – and I’m pleased with each of the projects where I’ve had the opportunity to provide input.  My biggest “pride-project” would have to be finishing the basement in our last home minus the plastering and carpet.  I’ve gotten pretty good at installing tile, electrical and baseboards – and even have my own Brad Nailer!

3. Who has been your biggest influence professionally?

I’m going to suck up and say “Andy Vinter” 🙂  Seriously though, Andy’s science preaches to the choir here – it’s a wonder that I hadn’t stumbled upon his stuff a LONG time ago.

4. What do you think about the future of Drug Discovery technology?

I’m seeing a lot of companies put all of their eggs in one basket and focusing on one or two clinical trials, at the expense of discovery departments.  If, and more likely “when” the trials fail, what happens then?  Is there anything in the discovery pipeline?  Nope – because discovery was canned.  I hope companies can strive for a better pipeline balance.

The past ten years ago have had boom and bust cycles in research spending, and despite assurances that the economy is getting better, our industry is still seeing massive cuts in people-power and funding.  It’s completely depressing.  I know many excellent drug discovery scientists who after being jobless, have retrained for other careers like real estate, radiology, accounting, etc.  This mass exodus of researchers is going to seriously impact our industry’s ability to keep producing good medicines – which is really too bad.

And then there is the huge amount of outsourcing.

Oh wait…I was talking about our industry.  My bad.

In my relatively short (12 years) career, I’ve seen combinatorial chemistry go from being the next “sliced bread” to something people pretend they weren’t into – just like we all pretend that disco is dead, but there’s always one or two Abba songs on our playlist.

Various “omics” buzzwords didn’t live up to pie-in-the-sky promises and willy-nilly virtual screening only kind of (but not quite) worked.  They were great ideas, but in practice, didn’t pan out as expected.

Drug discovery technology is likely going to make a U-turn and go back to a more “creative”, albeit, “smart” approach to designing drugs instead of randomly sampling to see if researchers can serendipitously find a hit.  Virtual screening WILL get smarter (and faster) and computational tools will become more common place in the hands of medicinal chemists doing drug design – which parallels the transition of NMR from being an expert tool, to being a daily use tool for chemists.

Computational experts will ultimately focus on developing new scientific approaches and models…or running IT departments (which would be a little depressing).  Enough rambling?  I might have had an opinion there…

5. What do you love most about your job?

Everything – I particularly like getting in touch with people and sharing our science.  Our science is strong, and it’s really cool when someone I’ve spoken to gets excited about our software.

6. What  is your favourite Cresset product to sell?

I like selling all of them.  But the one I really really really like talking about is FieldStere – in a previous job, I was trying to create a bioisostere replacement tool.  And while I had something that might have worked had I dumped more time into it, it was nowhere near as elegant or good as FieldStere.

7. What would you eat for your last meal on earth?

If it was my very last meal and there were no consequences (dietary or otherwise), I’d probably like a sampling of high-calorie desserts, some flavourful cheeses and a selection of ports.  Now, if my last meal on earth was because I was going to the moon the next day, I’d be far more conservative and go with a full English breakfast complete with black pudding.  Breakfast IS the most important meal of the day, after all.

8. You’re forced to go on holiday tomorrow: where would you go?

Depends on how much money I have to spend shopping.  If it’s a true “find myself” holiday, I’m going to hike to Base Camp 1 on Mount Everest.  If I’m going shopping…it could be any major city with a cool high end fashion district.  Who am I kidding?  I’ve been known to “find myself” in Louis Vuitton from time to time…and subsequently, find my savings account empty.

Want to speak to Rae about chemistry software, the state of drug discovery or her days as a theater star?  Just send her a message here, we know she’ll be delighted to hear from you.