Atorvastatin was the world’s best selling drug in 2006 with global revenues of over $13B. Key patents in the area protect 5-membered heterocycles at the core of the structure. Cresset reinvestigated the core of Atorvastatin using FieldStere, looking for novel, chemically tractable molecules to serve as potential alternative HMG-CoA reductase inhibitors. 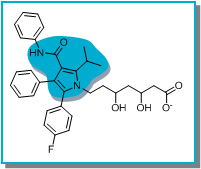 The 2D structure of Atorvastatin was pasted into FieldStere and the central core was selected for replacement (blue, below). It was felt that the carbonyl group of the core of Atorvastatin formed a key interaction with the protein and hence a ‘Field constraint’ was added to the FieldStere query such that this interaction was required to be present in bioisosteric replacements. Similarly, the iso-propyl group is known to be important for maintaining activity at HMG-CoA reductase and hence a constraint was added such that bioisosteres that lacked hydrophobicity in this region would be down weighted.

FieldStere searched 600,000 moieties for bioisosteric replacements of the core group that contained an aromatic ring. The resulting hit list was filtered within FieldStere to remove results with similar structures to Atorvastatin and those with high calculated logP. A first pass visual inspection of the top scoring results led to the selection of 7 bioisosteres for further investigation (below left).

A second round of selection using FieldStere’s 3D superposition of the final molecules on the Atorvastatin target structure (shown for one example above right) combined with physicochemical properties gave 3 series that were not covered by Pfizer’s core patent protection. These were selected for further evaluation (below).