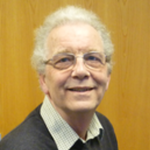 Cresset’s founder, Dr Jeremy Gilbert Vinter (known to all simply as Andy) has had a truly remarkable career and all of us at Cresset are delighted that the MGMS  (Molecular Graphics and Modelling Society) has chosen to honour his hard work with a meeting this September 19th -21st.   During his career, Andy has published over 50 scientific papers in peer-reviewed journals, contributed to 7 books and co-edited 1.  He has held visiting professorships at the universities of Sussex, Brunel, KCL, UCL and Utrecht, and been a faculty member at Cambridge. He has served on 9 government research council committees and 3 peer-reviewed journal editorial boards.

However, beyond such impressive career statistics lies a beloved colleague with a great sense of humour and an impressive insight into the future of drug discovery.  And so we present to you: 8 Questions with Andy Vinter:

1. What was your first job?

Sucking urine up a mouth pipette for salicylate trials by the uncouth toxicology department at Beecham’s Labs Mansion in Surrey (1964).

(Toxicologists are always naughty… one once told his American bosses at SKF that he had “crossed the ‘Ts’, dotted the ’Is’ and licked the ‘Rs’” for them   –  he got the sack!)

2. What is your career highlight?

Apart from being honoured in two weeks, there was the day the XED force field worked for me (1994), the day Wellcome gave me a grant to start Cresset (2000) and the day I was told I had won the Ramsey Medal at UCL for best postgrad (1973).  All of them a great surprise.

3. Of the many projects you have worked on, which are you most proud of?

Many (over 100 now) I know little of the outcome and any one could have been life-changing for the client but we will never know.  The most successful to my knowledge was the Cortisol/Cortisone 11betaHSD project in 2003 which is still going on- but there was a sad end for Cresset because we were cut out (for obvious reasons) very early on…  You can’t hope to win against the Wellcome Trust!!

I think the Divergence Projects have been most exciting.  Tim [Cheeseright, Cresset’s Products Director] did the original work that has probably contributed most to the success and eventual take-over by Monsanto.  But hear what Matt [Dimmic, of Monsanto] has to say at the Cresset User Group Meeting, pretty impressive!!

4. Who has been your biggest influence professionally?

Jim Black –undoubtedly.  He encouraged me non-stop from 1974 to his death in 2010 when everyone else thought I was off my trolley.  My lecture at the MGMS ‘do’ is entirely based on his influence and interests.  He was magic.  I have never met a match for his insights and enthusiasm. (Look him up on wikipedia – Prof Sir James Black OM FRS)

5. Where do you see drug discovery technology moving in the future?

A long question!!  Where it will go and where it should go are, I suspect, very different. The understanding of biological processes is primitive beyond belief and to think that attacking one particular target will lead to the expected clinical outcome is wishful thinking (as has been proved time and time again).

For Big Pharma, where it will go will depend on two things:

1) the money available for basic research, which is diminishing as their pipelines drain because of failed methods, escalating costs and FDA restrictions.

2) the stupid uptake of the latest scientific wow- whether it works or not – because that is what will turn managers on. Drug discovery money for academics dominates over basic science grants these days (trendy). This is  leading to a lot of contrived research applications that cannot be properly completed or understood commercially.   So- although Pharma will turn away from basic research and use academia to fill the gap, the fusion between the two will not be efficient enough to sustain good pipelines.

What should be done is to revert to the old thinking of serial drug development  – doing some chemistry, waiting for a biological result and doing some more chemistry based on that info.  Parallel methods have been the undoing of Pharma since 1990.  We need to set up dedicated teams (from academia and industry) that can use the amazing new technologies;  microfluidic chemistry for economy and speed/ cell-based biology to account for complex interrelated processes/ Xray and nmr spectroscopy for structure/ integration of validated computational methodology, all over-lorded in a focussed way to maintain discipline and target validation (which means getting it into man as early as possible) by experienced and visionary scientists who have the teeth to keep the sceptics, cynics, accountants and idiots from interfering.  This is the way to go….you asked!!

6. What are your thoughts on the MGMS meeting held in your honour?

Tickled – nay overwhelmed, embarrassed, not quite sure why but very grateful and a bit apprehensive…

7. What is the most unusual experience you’ve ever had working in a Chemistry lab?

Maybridge Chemical Company Ltd, Cornwall – 1968- before I came up to London to do a PhD.  There were only four of us in individual rooms in a tiny lab on the edge of Bodmin Moor, isolated from the rest of humanity, making what we liked with little care for Health and Safety.  During an unusually snowy winter in North Cornwall we  kept warm by keeping on our electric hob heaters.  It happened one day that I mishandled a conical flask full of ether and the solvent dribbled all over my right arm making it feel very cold as it hastily evaporated.  You may guess what happened.  As the vapour reached the heater my arm didn’t stay cold for long and suddenly it was spectacularly ablaze!  Fire extinguishers- what were they?  Not knowing what to do, I shouted for Steve, the senior chemist.  Without hesitation, he bundled me through the outside door and rolled me in the snow to put me out.  Although I was in bandages for three weeks,  I could now be one-armed if it hadn’t been for dear old Steve (whose surname I have forgotten) – Thanks mate- wherever you are…

8. What would you have for your last meal on earth?

A beef roast with potatoes cooked in goose fat with English mustard followed by ice cream and a bottle of Chateau Margaux 1985.  On the other hand, a cheese sandwich would do – and would I be hungry anyway!

Like Andy as much as we do?  Come meet him at the MGMS and the Cresset User Group Meeting.