FieldStere V3.0 includes several improvements to the scientific capabilities of the software.  In this second example of FieldStere’s updated abilities, we look at how fragment growing can be used with Mitogen-activated Protein Kinases (P38) to generate novel, drug-like molecules.

P38 (mitogen-activated protein kinases) are a set of protein kinases (Alpha, Beta, Gamma, Delta) which participate in signalling cascades controlling cellular responses to stress stimuli and are ultimately involved in cell differentiation and apoptosis.  The stress stimuli include responses to cytokines, heat shock, osmotic shock and UV irradiation.  These kinases are being recognised as important therapeutic targets: A P38 Gamma inhibitor has recently been approved for idiopathic pulmonary fibrosis (IPF) and P38 alpha inhibitors are potential anti-inflammatory agents eg PH-797804 which are currently in clinical trials for COPD.

A large number of P38 alpha inhibitors are known and for many of these, the X-ray crystal structures for the ligand complexes are available.  P38 alpha is a particularly plastic protein with inhibitors known to bind in a variety of different protein conformations.  This wealth of data extends to large inhibitors as well as small fragments.  Three example inhibitors are shown below in Figure 1. 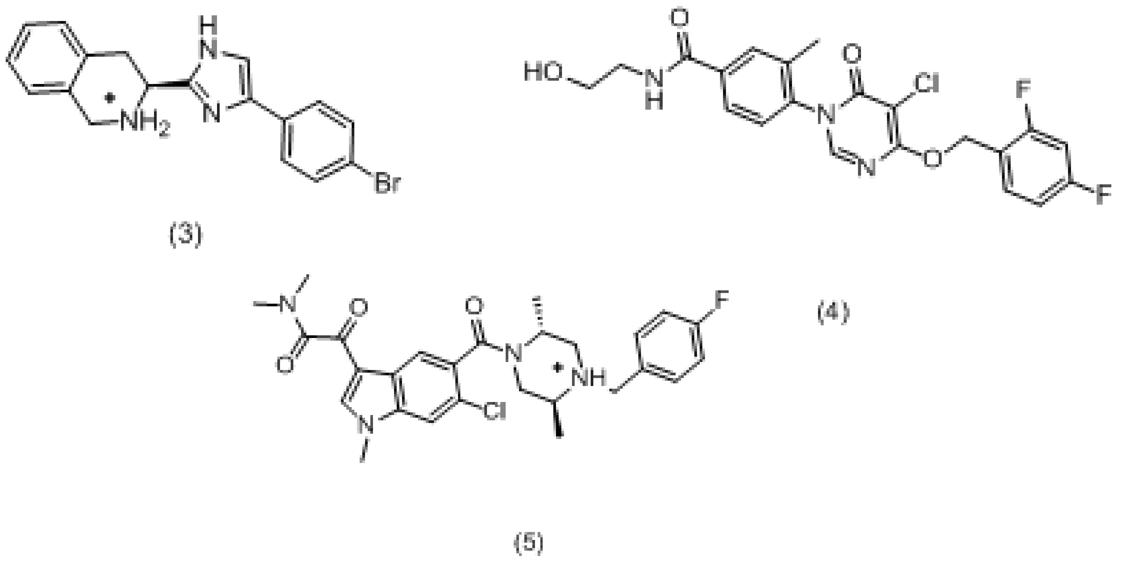 Compound (3) is a fragment which specifically binds to the inactive form of P38 alpha known as the ‘DFG-out’ kinase protein conformation.  In this form, the activation loop is distorted and the catalytic residues are displaced from their usual position and are thus incapable binding ATP (Figure 2). 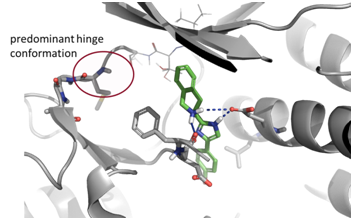 Unfortunately, this attractive non-competitive form of inhibition, although relatively rare, is not unique, and inhibitors which bind this conformation tend also to be inhibitors of protein kinases, which can adopt this conformation (eg Imatinib inhibits both c-abl, c-kit and PDGF-R).

In contrast, inhibitors (4) and (5) are more selective for P38, though they are ATP competitive and interact with an active conformation of P38.  They are selective due to the plasticity of P38 particularly in the hinge region.  The hinge glycine residue allows a 180 degree flip of its peptide bond such that a switching of the H-bond donor/acceptor pattern is required by the inhibitor (Figure 3).

We can demonstrate the utility of FieldStere in a fragment growth application here by using the compounds 3 and (4 or 5).  The combination of this fragment with these selective inhibitors could potentially yield novel selective inhibitors which are non-ATP competitive.  Growing towards the hinge region will also increase the potency of the fragment (compound 3).

For this experiment a dummy atom on compound (3) was used as the starter molecule for the process and compound (4) was used as the reference against which the resultant molecules would be partly scored (actually 3 and 4 were weighted using a 1:4 ratio of their contribution, respectively).  Effectively, fragment (3) was grown, by adding new fragments, guided by the field similarity to compound (4).

The results were limited by imposing some restraints eg (i) the fragment size limit was removed so that relatively large fragments could be obtained (ii) the fragment had to contain a ring and (iii) number of rotatable bond in the fragment was reduced to 3 or less, finally (iv) the p38 DFG-out protein conformation of the reference was used as an excluded volume.

Selected examples from the results of the experiment are shown in Figure 4. 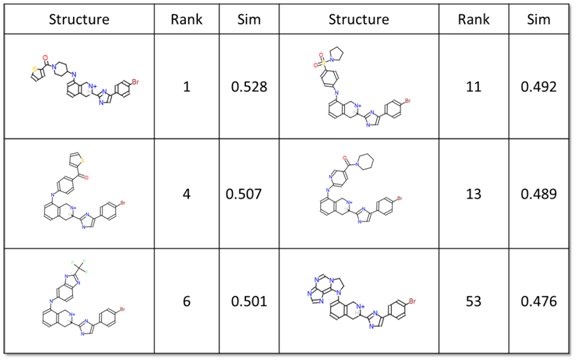 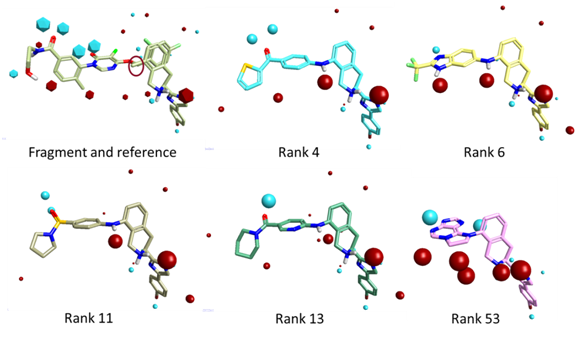 Fig.5 Example FieldStere fragment growth results in 3D. The red circle in the fragment reference highlights the dummy atom (fragment to be replaced).

Interestingly, the field point representation reveals a dipole feature present across all the compounds. This dipole is consistent with that produced by DFG-out compounds such as Imatinib which may allow a Phe residue (from the DFG motif) to wrap the inhibitor.

In the context of the protein, all the examples are capable of mapping to the flipped-hinge protein conformation and thus have a potential selective handle.  Furthermore, each example is also consistent with an inactive DFG-out protein conformation ie will likely be ATP non-competitive in their mode of action if they inhibit this kinase.

Fragment based drug discovery is an increasingly popular technique to parallel the more conventional HTS paradigm.  Fragment joining and fragment growth are essential tools in the armoury of practitioners in this new art.  The fragment growth example described here demonstrates the flexibility of this new release of the FieldStere software, the power of fields, the broad scope and applicability in this and other areas of drug discovery.

Still have questions about FieldStere?  Contact us at support@cresset-group.com, and we’ll be happy to help.