The Flare™ V6 release is packed with enhanced features and science plus new features including library enumeration, quantum mechanics (QM) and pocket detection and analysis.

Enhanced rendering of ligand and protein surfaces, together with an adjustable light position, 3D background effects and enhanced depth of field (Figure 1), make it easier to fully appreciate the three-dimensionality of your protein-ligand complex.

Visualization of favorable ligand-protein interactions and steric clashes is also improved, with contacts shown as thin tubes with customizable colors and an option to toggle contact labels on-off if desired (Figure 2 - left). A new type of contacts, hydrophobic interactions, can also be displayed.

Figure 2. Ligand-protein interactions for PDB: 5FNU. Left: Enhanced display of contacts in Flare. Colors are customizable: in this picture, the default color for the new hydrophobic interactions was changed to orange. H-bonds are shown in green, aromatic interactions in purple. Right: 2D interaction map for the PDB: 5FNU complex.

The new Interaction Maps (Figure 2 right) are an alternative way of showing ligand-protein contacts. Use these to create clear 2D diagrams of favorable interactions and steric clashes to include in presentations, reports and publications.

The new Library Enumeration module (Figure 3) enables you to enumerate your chemical libraries and arrays choosing from a list of more than 50 popular synthetic chemistry reactions. This makes it easy to create your own in silico reactions using Flare’s user friendly interface to RDKit enumeration.

Libraries of small to medium size can be enumerated directly from the GUI, while larger libraries can be created saving the output to disk. Results can be focused on the ideal physico-chemical space by applying property and substructure filters during the enumeration experiment. 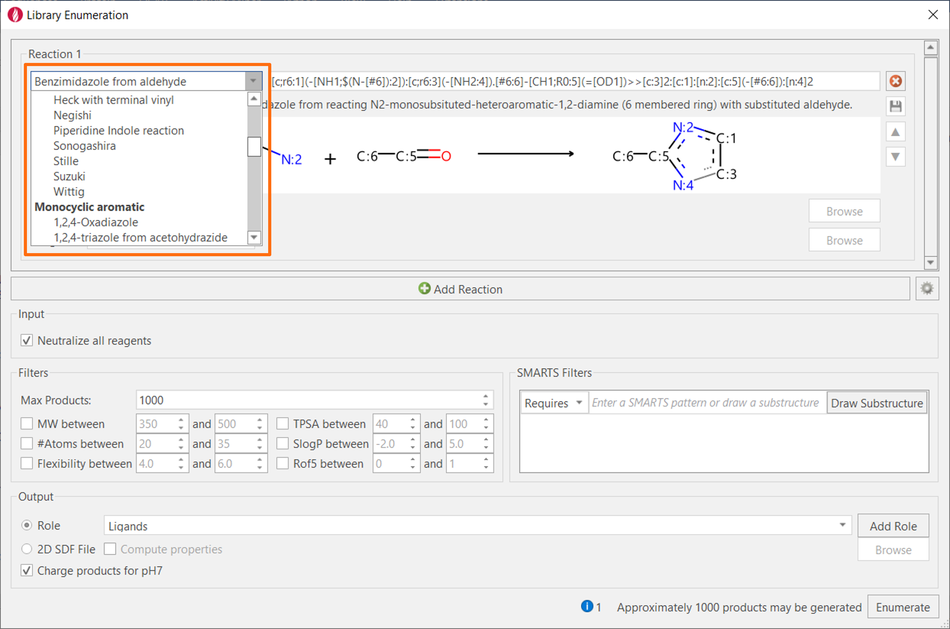 A new module for running Quantum Mechanics (QM) calculations on ligands, based on the PSI4 implementation is also available in this release. You can now use QM in Flare to perform geometry optimizations and single point energy calculations of individual ligands, conformation ensembles and ligand poses, and to compute and display molecular electrostatic potentials for ligands (Figure 4) and QM torsion profiles for selected rotamers in ligands of interest.

Calculation time can be optimized by using the Cresset Engine Broker™ to connect to a local cluster or cloud computing facilities. 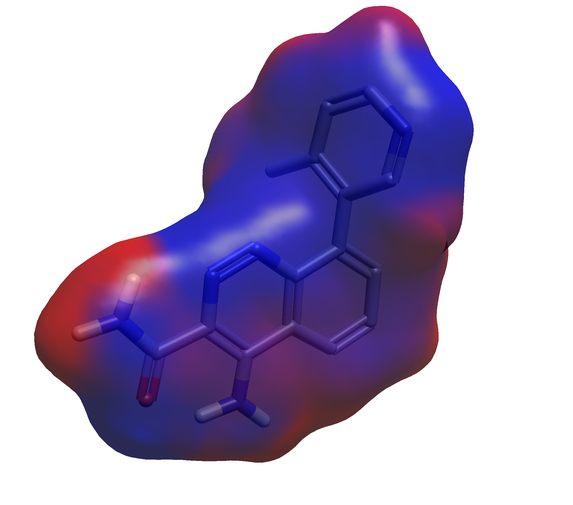 The identification of potential druggable binding sites for small molecule ligands is a key step in the molecular modeling of novel targets and lead series.

Pocket detection and analysis in Flare can be used to search for different pocket or cavities in individual protein structures, and to monitor the frequency of opening and druggability of pockets in molecular dynamics trajectories.

Results are shown as multi-color surfaces (Figure 5) mapping different types of potential binding pockets: each pocket is characterized by different parameters in the pocket information table, including a druggability score. 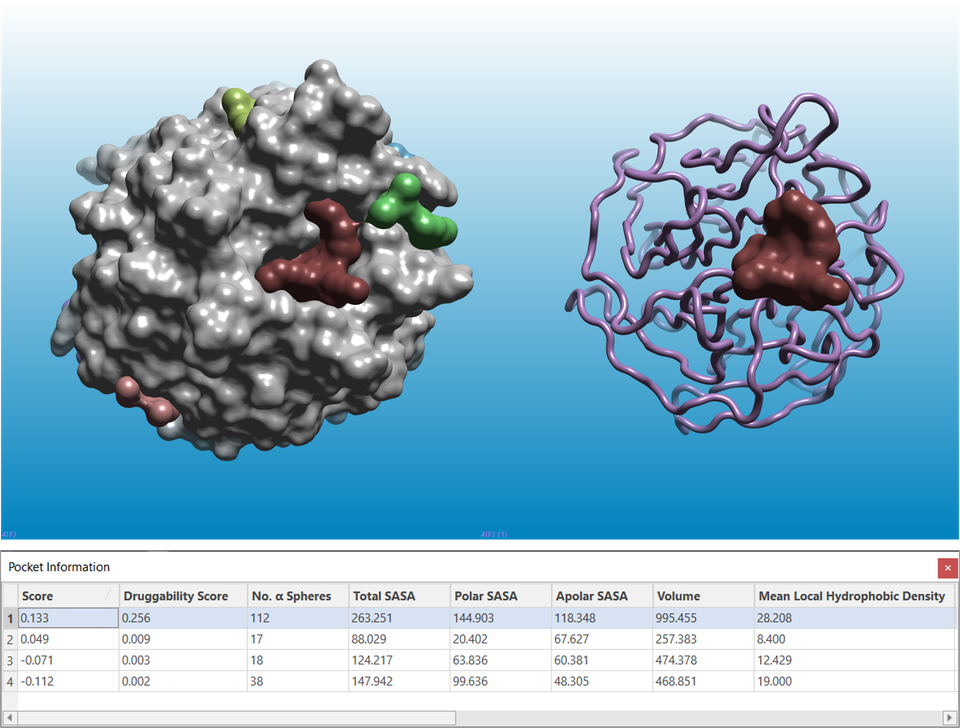 Figure 5. Results of a pocket detection experiment ran on the apo structure of KEAP1 (PDB: 4IFJ). Left: the solvent excluded surface of the KEAP1 protein is shown in grey. Right: the KEAP1 protein structure is shown as a pink ribbon. In both pictures, pockets are shown as multi-color surfaces. The pocket information table (bottom) reports the characterization of the pockets according to a number of different parameters.

Accurate force field parameters are essential to reliably predict the thermodynamic properties of small molecule ligands and cofactors. Torsion parameters, in particular, are crucial as they describe the largest local motions within the molecule, thus impacting the ligand’s conformational distribution during Dynamics and Flare FEP calculations.

In Flare V6, the calculation of custom torsion parameters for small molecules has been completely redesigned to use a workflow based on the ANI-2x deep learning QM approximation (Figure 6). This machine learned potential can provide the accuracy of the reference density functional theory (ωB97X/6-31G(d)) at a fraction of the computational cost required to run traditional QM rotation scans. 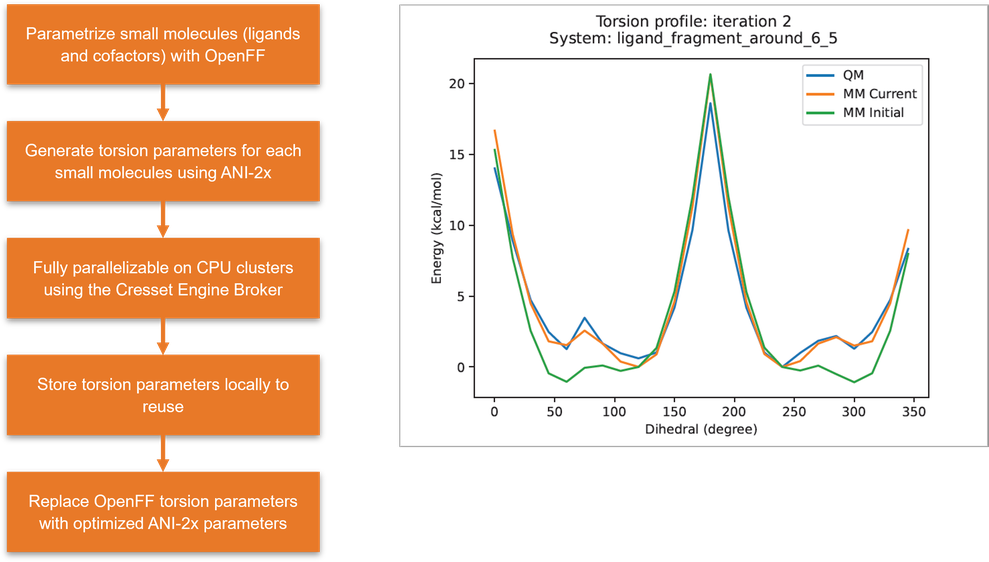 The outcome is an optimized custom force field for each small molecule included in your Flare FEP project or Dynamics simulation. As parameters are stored locally, they only need to be calculated once and can be reused in any subsequent experiment.

Flare V6 includes new visual tools to facilitate the analysis of Molecular Dynamics trajectories and the interpretation of results.

Interactive 2D RMSD plots (Figure 7) are useful to monitor protein structure changes over the dynamics trajectory, enabling you to check whether the molecular system is dwelling in a certain conformational state or revisiting a previously explored state and to identify large conformational changes between the frames. 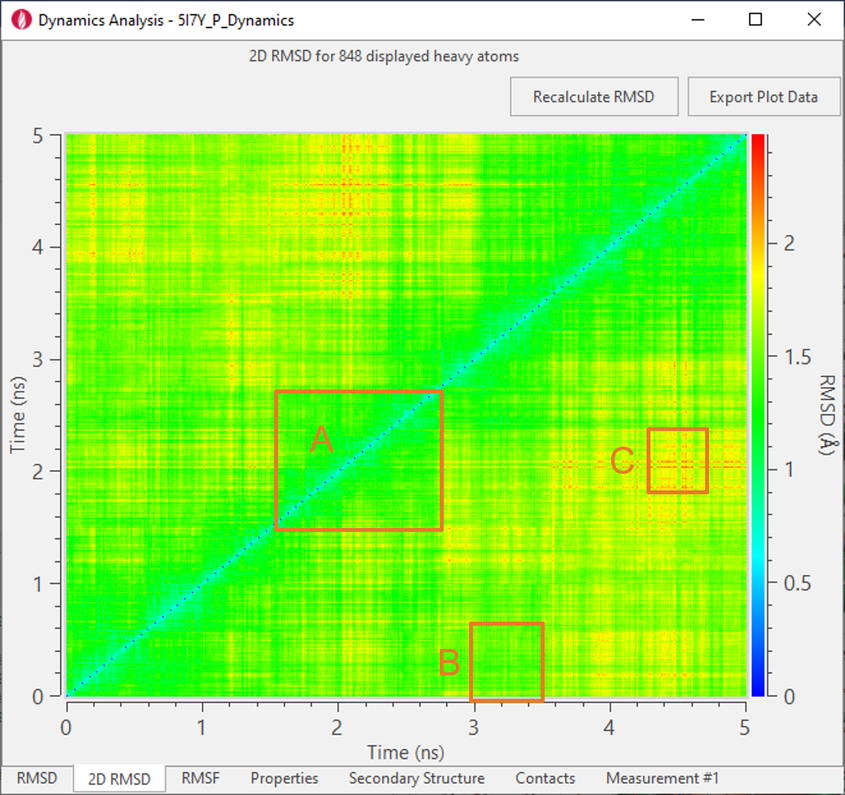 Figure 7. 2D RMSD plots help you monitor protein changes over a dynamics trajectory. Blocks of low RMSD values (blue/green) along the diagonal (A) indicate the occupation of a given state: off the diagonal (B) indicate that the trajectory is revisiting an earlier state. Red cells (C) indicate large conformational changes between the frames.

RMSF plots monitor individual residue flexibility, giving an indication of which residues contribute the most to protein motion during the simulation (Figure 8 – left). The Secondary Structure table shows a map of the secondary structure adopted by each residue in the protein for each frame of the Dynamics simulation (Figure 8 – right).

Figure 8. Left: RMSF plots map the Root Mean Square Fluctuation (RMSF) for each protein residue over the simulation. Right: The Secondary Structure table shows a map of the secondary structure adopted by each residue in the protein for each frame of the simulation.

Enhancements have also been made to the Contacts table, which monitors favorable ligand-protein interactions such as H-bonds, aromatic-aromatic over the dynamics trajectory. This table (Figure 9) now optionally monitors also hydrophobic interactions and features a ‘barcode’ map of each contact’s presence or absence in each frame of the trajectory.

Additionally, the system property plots have been improved (Potential energy, temperature, box volume, density) to show the moving average for the property, and the plots for monitoring distances, angles and torsions, which can now be shown either as line plots or histograms.

It is now easier to troubleshoot problematic transformations in your FEP experiment. Problematic links, typically associated with high hysteresis and/or a poor overlap matrix, should be further investigated to asses whether a fine-tuning of the simulation conditions may give improved results. Ideally, you want to re-run the transformation without loosing the original results, as it is difficult to predict whether the new conditions will give better results than those used initially.

The new ‘Duplicate links’ feature (Figure 10) enables you to add multiple instances to selected links in the perturbation network with customizable settings: for example, manually setting the lambda windows number and spacing, or using a longer simulation time. After recalculating the new instance of the link you can then decide whether to keep the new instance and include the results in the calculation of relative activity, or whether to exclude one or more instances from the results or delete them altogether.

Enhancements to Flare FEP in this release also include new advanced system options such as:

These include a new Gaussian Process method for building regression models and a new Random Forest method for building classification models. Support Vector Machines and k-Nearest Neighbours and Random Forest regression still remain as alternative methods, together with the ‘Automatic’ model building option to automatically run all the methods and pick the model with the best statistics (Figure 11).

As in previous versions of Flare, these methods can be used to build robust QSAR models for predicting the activity and ADMET properties of your compounds, using Cresset 3D descriptors, modelling the electrostatic properties and shape of the aligned ligands, as well as custom 2D and 3D descriptors.

GIST water analysis uses the OpenMM dynamics engine embedded in Flare to analyze water positioning and stability. This method can be run on empty active sites as well as on liganded proteins: in each case, it generates heat surface maps that highlight regions of high and low water stability.

Flare V6 features additional water analysis surfaces which significantly enhance the interpretability of GIST results. As an example, Figure 12 shows the results of a GIST water analysis experiment ran on PDB: 4ZLZ. In the ligand-protein complex, the inhibitors binds to the P-loop of Bruton Tyrosine Kinase (BTK) through a bridging water molecule (in ball and stick). The bridging water molecule makes three hydrogen bonds interactions, one with the ligand and two with the BTK active site.

GIST analysis correctly identifies the position of the bridging water molecule in PDB: 4ZLZ complex as a region of high water density. A water molecule sitting in this region is predicted to be enthalpically happy (not surprising, as it can make a nice network of H-bond interactions). However, GIST predicts that the water molecule is entropically unhappy (entropically, the water would prefer to be in bulk water where there is more disorder).

As the region overlapping the bridging water has an overall a positive ΔG (at the specified threshold) and sits in a region of high density, it is mapped as a local unhappy water. Waters which sit in this region should be displaced by substituents which mimic the network of H-bond interactions made by the bridging water: this is in line with experimental evidence (see for example PDB: 4Z3V).

Flickering waters for docking and scoring

In Flare V6, selected water molecules can be marked as ‘flickering’ and dynamically switched on/off during your docking experiment to achieve the optimal docking pose each ligand (Figure 13). 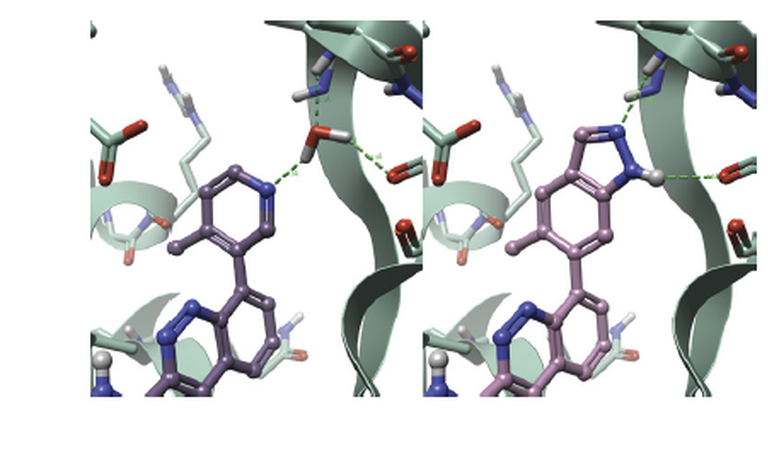 Figure 13: Flickering waters will automatically be switched on/off during docking to generate the optimal pose for each ligand.

Additional new features for docking and scoring in Flare V6 include an expanded list of warheads and nucleophilic residues for covalent docking, the capability to freeze selected torsions to the desired angle to better mimic crystallographic conformations during docking and many other improvements to the docking and scoring GUI.

Flexible licensing for all users

Whether computational chemist, medicinal chemist, or academic, there is a Flare licensing option to suit you. Try Flare V6 on your projects – request an evaluation.