In 1992 I was about to start a PhD on ‘catalytic antibodies’, investigating the amazingly versatile ability of the immune system to prepare artificial enzymes. It all sounded fascinating, and still does. Alas, rather than building antibodies, the path of my PhD altered, resulting in me developing my organo-phosphorus chemistry skills and producing ‘transition-state inhibitors’ of beta lactamase enzymes instead.

However, I retained a keen interest in molecular recognition and a familiarity with antibodies as a protein class and this has proved useful for our work at Cresset Discovery Services today. Indeed, it wasn’t until much, much, later that immunoglobulins would reveal their impact as important future medicines and of course this was way before the multi-billion-dollar blockbuster TNFa targeting biologic Adalibumab (Humira) (Figure 1, right).

Figure 1 illustrates the diversity of recognition possible in antibodies, as modeled in Flare™, ranging from small molecules (sulfathiazole) to big molecules (Fullerene C60)1 and peptides (TNFa)2.

The main premise of catalytic antibodies is to elicit their production in response to a transition state that can be mimicked by a ligand structure, which in theory then reproduces enzymic behaviour in the resultant protein. This pursuit simultaneously probes our fundamental knowledge of molecular recognition and of enzyme catalysis.

A catalytic antibody that cleaves cocaine

In 2006 workers at Scripps published work on a catalytic antibody3 that cleaves cocaine at the benzoyl ester. The antibody was elicited using an aryl phosphonate ester – a mimic of the carboxyl ester hydrolysis transition state.

The insights gained through the X-ray structures that were solved for this system were remarkable. Multiple components of the reaction coordinate are shown to exploit common recognition patterns, whilst the different geometries are accommodated by both residue and backbone movements in a dynamic process (Arg and Tyr movements in Figure 2).

This is an excellent model system. It shows how some interactions are very favourable e.g., the cation-pi interaction of the tropane is very solid across the structures, whilst others e.g., the ester, are variable. It also demonstrates that proteins, and in particular enzymes, ‘breathe’ – they are not statues (Figure 2). 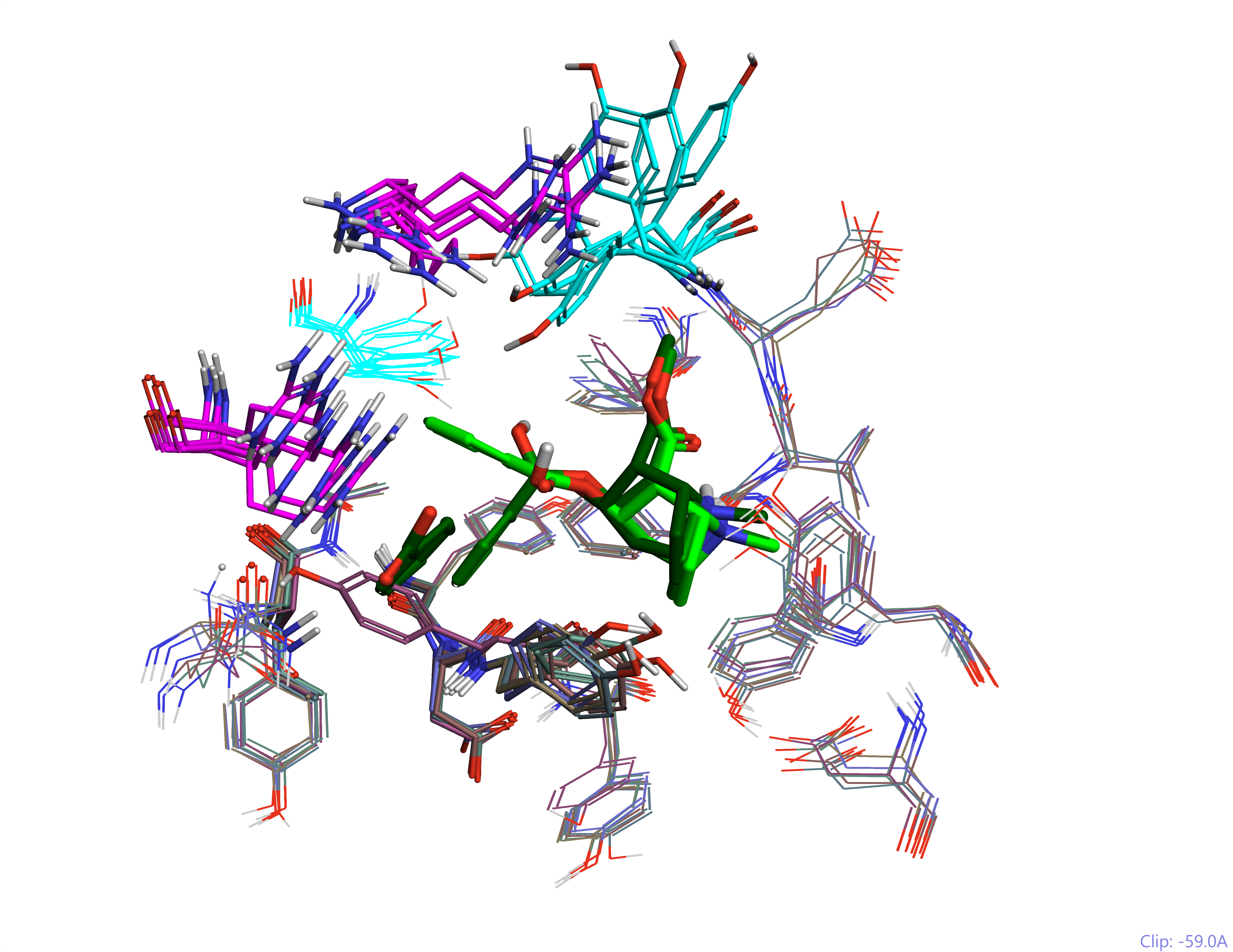 All molecular recognition is not equal

One very interesting facet of molecular recognition demonstrated by antibody antigen interactions is that these interactions are not all equal. In fact, there are lesser and greater interactions – the latter of which can predominate in driving antibody production. Preferred interactions (or ‘hot spots’) can be visualised using various techniques (e.g., as demonstrated using the previous cocaine system modeling in Flare shown in Figure 3).

Antibodies are produced via natural selection processes as a cellular response to a presented antigen. Some parts of the antigen are better than others at eliciting antibody responses, since they may involve preferred interactions, and so the resultant antibody may not bind in a therapeutically useful way.

Modeling and design of these interactions (i.e., via antigen engineering) becomes a useful task, since leaving it to nature can divert us from our intended goals.

While we are actively working and delivering on projects involving biologics, client confidentiality means that it remains a challenge to describe details of work done for commercial clients. We can, however, speak more generally and we have recently delivered on projects to:

Biologics remain a very important class of protein targets for disease therapeutics which we intend to continue to support through our innovative modeling services.

Find out how we can accelerate your project by requesting a free confidential discussion.