This bi-annual event was, as usual, of a high scientific standard with a great line-up of talks.

One main difference between this year and previous years is the clear acceleration of access to structural biology, and the promise that holds of unravelling the nature of the interaction of this important protein class with its small molecule counterparts. However, in spite of the potential influence of this new structural information, a traditional drug discovery path seems still to be the universally adopted way through ligand optimization. It’s probably an important reminder, and particularly relevant for this class of proteins, that snapshots or ‘stills’ of proteins which fundamentally are ‘dynamic machines’, however helpful, is not enough.

Whilst there is certainly room for modeling approaches to inform this area, clearly the uncertainty is still enough to sow serious doubts in the minds of the lead medicinal chemists charged with running these projects.

A plethora of ion channel targets were covered, some old but many new (table 1).

For those who have been in this area any length of time, and are interested enough to frequently browse the PDB (myself included), all the targets will be relatively familiar. The exceptions, for most, are likely to be CLC-1, TMEM16a, Orai and Piezo. The former two are unrelated but both dimeric chloride ion channels.

Orai is the putative Ca store operated channel and is out there on its own in terms of structure. It is a hexameric channel - reminiscent of bacterial urea channels.

Piezo is extraordinary; a remarkable trimeric channel but dissimilar to all other trimeric channels (like P2Xs, ASICs, ENAC) in that, amongst other things, it has propellers that sit in the membrane to mechanically open the channel in response to membrane flattening, i.e., blood flow across epithelial cells. A fascinating talk and poster were presented by Professor David Beach and his post-doctoral research associate Charlotte Revill. Interestingly, the discovery of a small molecule activator Yoda and a specific antagonist of that activation; Dooku1 are very closely similar molecules. An even closer analogue playing on a halogen substitution theme is completely inactive. I modeled all three molecules in Cresset's ligand-based workbench, Forge™, during the talk and the analysis reveals clear differences in electrostatic patterns for each of the isosteric ligands (Figure1). 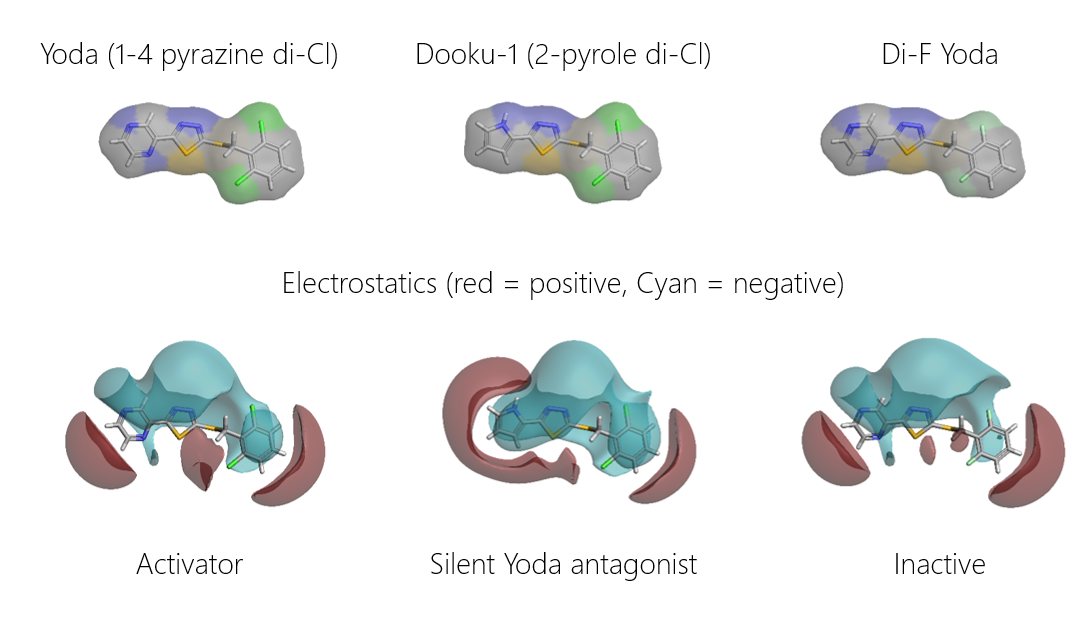 In figure 1 it is easy to see that the antagonist has different electrostatics on the left. Not so easy to see but it is there on the right inactive structure, there is a slight shape difference but also a more significant negative electrostatic loss in the Pi surface density of the di-F aryl-halogen system relative to Yoda.

Another highlight of the session was a ‘double act’ ironically on the K2P ‘twin-pore’ potassium channel family specifically Task1 by Professor Liz Carpenter from the SGC/University of Oxford and Thomas Muller from Bayer. The site of action of these and other ligands has been recently determined by X-ray diffraction confirming a long suspected belief (by some) that interdomain region ‘fenestrations’ are key sites of interaction for open channel blockers and activators.

It was interesting to note the observation that Task1 has an unusual lower gate which creates an enclosed cavity not dissimilar to the situation for Herg which may account for both channels relative increased ability to harbour small molecule blockers.

Another interesting talk was by Ulrich Zachariae from University of Dundee who talked about applying MD simulation techniques to ion channel transport through potassium channels. The main conclusion of which was that the function of the selectivity filter is to pass ions that are stripped of their solvation shell. Both Na and Ca ions require greater energy for this process are more energetically favoured holding onto their hydration sphere and are thus less able to pass through.

Unfortunately, I cannot cover all the talks here, but some of the other examples of ligands and field models captured are shown in table 2.

Table 2 Example 2D and 3D structures captured and modeled during the talks.*

*Note that these are my live captured structures and notes, so I recommend you fact check the structures, particularly for finer details like specific chirality, etc. Please refer to published materials for confirmation.

Overall it was an enjoyable and informative conference with plenty of scope for probing some of the latest medicinal chemistry and structural research going on in the ion channel field.