“Scrooge had a very small fire, but the clerk’s fire was so very much smaller that it looked like one coal. But he couldn’t replenish it, for Scrooge kept the coal-box in his own room; and so surely as the clerk came in with the shovel, the master predicted that it would be necessary for them to part.”
Charles Dickens, A Christmas Carol


“Little Jack Horner , sat in the corner, eating a Christmas pie;
He put in his thumb, and pulled out a plum, and said ‘What a good boy am I!”
Traditional English

As you’re reading this, you may be wondering about whether the Cresset team might have been into the eggnog again. What do coal and Christmas pie have to do with computational chemistry?

Despite the common occurrence of π-cloud electrostatic interactions, traditional atom-centered force fields (with atom-centered charges) are incomplete in their description of these types of dichotomous (simultaneously both electrostatic and hydrophobic) interactions. And while traditional approaches will get you some of the way to truth, it misses induction and other through-bond / through-space interactions that result from the electronic anisotropy.

π-π interactions take on a number of motifs (edge-to-face, offset parallel stacking, etc.) in both small-molecule crystals and protein-ligand crystal structures. Traditional MM force field calculations predict these interactions to be face-to-face. To replicate what is seen experimentally (e.g., edge-to-face), an electronic structure method (i.e., QM) or an “electron-aware” force field would be required. 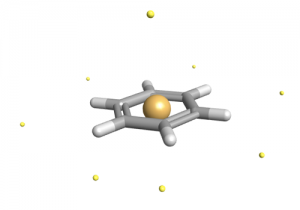 Underlying all of Cresset’s software is the XED (eXtended Electron Distribution) force field. XED is now in its 3rd iteration, and has been a 30-year work-in-progress for Cresset’s founder, Andy Vinter.

The XED approach is unique in that it explicitly represents electron anisotropy by using a distribution of charged “orbital points” around the molecule (depending on atom hybridizations), effectively moving the negative charge OFF the nucleus. Each XED point can thus be seen as p-orbital electrons (lone pairs, or Π-cloud delocalized pairs; and these points are included in the MM optimization. 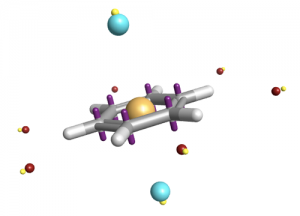 Figure 2b: Correct predicted aromatic stacking (edge-to-face) from XED/Cresset calculations.
Obviously, folks (including myself!) could make the argument that a conventional force field method could be augmented by fitting the electrostatic potential from QM calculations to the charge terms. However, this might be an unrealistic endeavor, as each fragment would need to be assessed independently as the charge distribution is dependent on the neighboring atoms. This approach would be likely to stumble in systems with high degrees of rotational freedom, where energies and electronic distribution are tightly linked to conformation.

XED, with its off-nucleus charges, avoids the pitfalls of the electrostatic potential fitting approach. The XED charges are set using an empirical charge generator that takes into consideration both electronegativity and electron drift. When you think of what atoms are really like, it makes sense that the positive charge is on the nucleus, and the negative charge is not!

While enjoying a nice glass of eggnog, I encourage you to take a peek at the following papers: