The starting point is one or more fragments that are known to be responsible for . Perhaps they have been isolated from other projects, or it is known that they link with important elements of the protein binding site. The challenge is to grow a compound from one or to identify linking chemistry for two or more fragments.

F-uracil as an anti-cancer and anti-viral treatment

To mimic a fragment linking experiment with the software, the bis-oxime linker was excised from an active ligand (PDB: 3FCI, Figure 2). The two fragment atoms to be joined were selected and suitable fragments with appropriate distance and geometry, which were capable of re-joining them, were inserted. Fragments were sourced from databases derived from ZINC and ChEMBL. The resulting molecules were automatically constructed in-situ, minimized and then scored against the parent compound using a field-based 3D similarity metric. 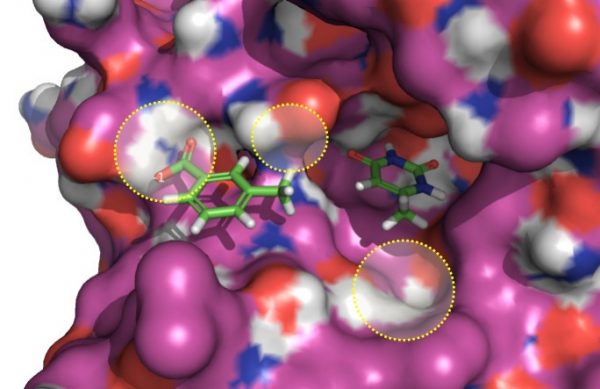 Active fragments originally tethered by a bis-oxime linker (disconnected for this experiment), shown embedded in UDG. In the software, the protein is effectively employed as an excluded volume.

The example results (Figure 3) show the diverse range of the output suggestions for new linking chemistry. Importantly, each of the new fragments not only satisfies the geometry and length requirements for the reconnection of the but also has features consistent with important interactions within the protein.